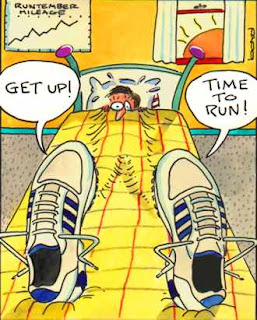 For all of you who thought you were beating the system by unscrewing the top of your "I Can't Believe it's Not Butter" spray and dumping it into your Kraft Macaroni and Cheese to make it fat free, think again.

It's the spray technology that makes it fat free. In fact, the entire bottle contains 900 calories and 90 grams of fat. I don't know about you, but I am devastated by this news. I have been substituting spray butter for the real thing for years and this explains A LOT. Bottom line--if you are currently practicing this culinary charade, you need to cease and desist immediately!

In keeping with my grueling marathon training schedule, Mister Ferguson decided it would be fun we both participated in a 10 mile "Shamrock Shuffle" on Saturday morning. Races are nothing new for Tiddy, I've been a casual runner for years. I enjoy showing up, running a new course, getting a t-shirt and maybe a cookie at the end. I don't come in first, I don't come in last. On the way there, I don't think much about the race. I'm too busy trying to slurp down as much coffee as I can so I'm juiced up enough to finish the damn thing.

On the opposite end of the spectrum sits Mister Ferguson. Whereas I am a mere participator, he is a competitor. I guess I didn't realize this was his FIRST RACE EVER, but it became very apparent as we approached the site. When we arrived, he immediately began sizing up all of the runners that were congregated in the parking lot while I was busy casing the joint for a Porta Potty.

What's annoying is that the serious runners were all taking a light jog (that resembles my full-on sprint) to loosen themselves up for the big dance. Treating this as though it were the Olympic trials, Mister Ferguson decided he also needed a warm-up run to adequately compete. "Come on, Tiddy!" he pleaded. "Let's get out there and get our muscles ready for the race!"

I informed him that this was not my first rodeo and I was quite sure I was going to need everything I had and more to finish the race. I had no desire to get out there and show off by running before it was absolutely necessary. He was a little dejected, but knew I spoke the truth.

A mere ten minutes later, we were lined up and ready to go. He high-fived me and wished me a good race and slowly started to edge his way to the front. I knew my place, so I hung back with the rest of the cruisers.

As soon as I finished the first mile, I knew I was in for one hell of a run. Some sort of sadist designed the course and it was full of hills and smells of cow manure. I amused myself by counting the dead possums on the road. Wow--their tails are really long! I can't complain, though. I finished the race and my iPod was kind, playing the right songs at the right time. If you would get a gander at my playlist, you would swear I was some sort of gangster or hoodrat. There is a TON of hardcore rap and some random Steve Winwood, Lionel Richie...whatever gets me through. Sometimes I catch myself rapping out loud to NWA and it is pretty embarrassing. Right now, my power song is "Swagger Like Us." This song is great to run to and also contains such valuable insights as:

"No, I can't teach you my swag. You can pay for school but you can't buy class."


"I can't wear skinny jeans 'cause my nuts don't fit."

I did see Mister Ferguson at one point during the race when he lapped me by a pretty significant distance. He had a huge smile on his face and was galloping down the road like Seabiscuit. I'm pretty sure I was wearing a grimace and throwing gang signs.

The good news--Mister Ferguson finished the race in 1:17! I finished a long time after that! We both got really nice long sleeve t-shirts with a leprechaun on the front and I really felt like I earned it!

Like I mentioned before, I am running the Pittsburgh Marathon. It is 26.2 miles and since I run really slow, it will take me about 10 years to finish it. As a result, I am going to need a lot of songs on my playlist to get me through the race. That's where YOU come in. I am calling on all of the readers of tiddy.com to send me any songs get you going in the gym, on the road or in the car. You can send them to me at tiddyferguson@gmail.com or comment on the blog. Either way, I need you! My existing playlist is getting old and I'm losing steam.

Posted by tiddy ferguson at 7:38 PM