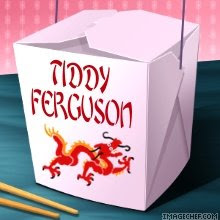 OMG is the only way i can describe what happened to tiddy last night. although it might gross you out, i will tell you the whole sleazy story.


it all started at dinner. i was entertaining clients and the gin and tonics were flowing. i glanced at the menu and was dismayed that there were no spaghettios or chicken fingers listed--classy joint. as a result, i had no option but to get the crab cakes. they arrived, i had two bites and thought they were "mayonnaisey" so i laid off. unfortunately, it was too late.


you see, all of tiddy's homies know that she suffers from debilitating irritable bowel syndrome. admitting this might be embarrassing to some people, but there ain't no shame in my game. over the years, i have learned what to eat and what to avoid, but every once in a while i get too big for my britches and think i can eat anything. when this happens, i pay the piper.


back to last night. about ten minutes after taking the second bite of crab cake, i felt that old familiar feeling in my stomach that only means one thing--get to the bathroom IMMEDIATELY! i smiled at my guests, excused myself and tried to make a graceful exit. once i got out of eyesight, i hauled ass to the bathroom and tried to give it hell. unfortunately, nothing happened. i wanted to write that old poem on the bathroom door that i see so often:


here i sit all broken hearted
tried to shit and only farted
dismayed, i returned to my seat and battled excruciating waves of stomach pain through dessert and coffee. after the check was paid and i got into my car, the real fun began. no sooner than two minutes after i pulled out of the parking lot, the shit i so desperately wanted to take in the restaurant reared its ugly head.


i broke out into a cold sweat. words cannot express how close i was to shitting my pants. i am NOT exaggerating. i happened to be on the phone with my friend steve at the time. bless his heart, he was trying to get a read on where i was and was throwing out suggestions as to where i could make the deposit. when he said "home depot" i nearly cried because i couldn't fathom walking through the parking lot and searching the huge building for the promised land.


when i began lamaze breathing and basically going into labor, i hung up on steve. right as i reached in the back seat of my car for an olive garden bag that i was going to pull over and take a dump in, i saw a wendy's. a glorious wendy's that saved my life--and probably the interior of my car. i'm not going to go into details here. if you saw dumb and dumber, it went something like that.


those of you who do not suffer from ibs are probably disgusted, but you don't know how bad things can get. sadly, this is not the worst episode tiddy has endured. before i knew i was allergic to miso soup, i got violently ill every time i ate japanese food. i was explaining that to mike oxsbig today and he said he gets sick when he has miso soup also! so let this be a warning to the readers of tiddy.com--next time you go for sushi, avoid the soup if you aren't going straight home after dinner. however, if you want to drop a few pounds for a special occasion, it might not be such a bad idea!


thank God this story had a happy ending. speaking of endings, it is almost the weekend ALREADY! promise i will blog tomorrow--i was too traumatized after i left wendy's to deal with internetting and i really wanted to tell this story properly.

Posted by tiddy ferguson at 8:13 PM