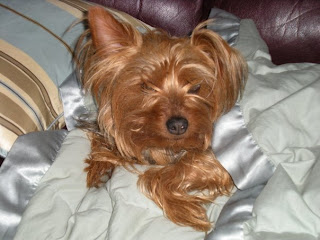 This is my dog Nacho. He’s a twenty pound Yorkie with devastating good looks and a shitty attitude. Shortly after Mister Fergs and I got married, I had an overwhelming urge to take care of something. In retrospect, my biological alarm clock was ringing, and getting a dog was my way of hitting the snooze button.

For months, I poured over newspaper ads, Craigslist and breeder Websites searching for a little Yorkie I could call my very own. This little guy was going to go everywhere with me and would have the best doggie outfits and bones money could buy. He would only eat dog food specially formulated for Yorkies and be squired around town in an elaborate handbag with obnoxious logos plastered all over it. At this time, I was in my twenties and was significantly more self involved and out of touch with reality than my 35 year old self is today.

Mister Fergs never had a dog growing up and was not all about welcoming this furry creature into our home. He was understandably apprehensive about the whole situation and brought up good, cerebral points about how a new pet was going to impact our lifestyle. We would have to feed it, walk it and find someone to watch it when we went away, which was frequently. The dog would have to be potty trained and groomed regularly.

“Not a problem,” I assured him. “I will take care of everything. I grew up with dogs and I know all about them. You won’t have to lift a finger.” He still wasn’t sold. Eventually, after weeks and weeks of pleading, crying and full on tantrums, he acquiesced. We were getting the dog.

It happened on a Sunday afternoon. I had contacted a breeder about 20 miles from our home and she had one boy left. He was on the bigger side, she explained, so she would knock a hundred bucks off of the price. Instead of having us drive all the way out to her “farm,” she would just meet us in the parking lot at Chuck E Cheese. First red flag.


We pulled up in the parking lot and Mister Fergs wasn't talking at all. I was doing everything I could to distract him from the situation—playing a new CD I had just gotten, talking about the weather. It wasn’t working. He was a man who was resigned to his fate and he didn’t like it.

The breeder was late and we were ready to pull away and forget the whole thing when she pulled up in a car held together with duct tape with smoke pouring out of it. Second red flag. She emerged holding an adorable mild mannered puppy that smelled like a pack of Marlboro Reds. That was it. I had to rescue this little guy from a raging nicotine habit and an inevitable case of canine lung cancer. She showed us the dog’s papers detailing his pedigree and certification from some random kennel club. They had a dirty footprint on them. Third red flag.


Mister Fergs reluctantly peeled some cash out of his wallet and just like that, we were dog owners. We drove straight to Pet Smart to buy Nacho all of the things he would need to be comfortable in our home—food, cage, bowls, bones and puppy pee pads. As we were perusing the aisles, a seemingly nice woman came up to us and said, “What a cute little puppy!” and started to pet him.

Mister Fergs, beaming with pride, replied, “Yes! We just got him!” I was so relieved that he was starting to get excited about the dog. At that point, the woman started screaming at him. “Just so you know, your dog is full of worms. These breeders use cheap wormers and they don’t work and that puppy’s insides are just crawling with worms.”

I thought he was going to vomit right then and there, and to be honest, I wasn’t far behind.

We made it home and settled into life with a puppy. And it sucked. I will honestly say it was worse than having a newborn. He peed and pooped all over the floor. He barked at Mister Ferguson incessantly. He chewed up all of my favorite shoes and ripped those puppy pee pads to shreds. He kept getting bigger and bigger and busted out of that doggie handbag at record speed. When I took him to the vet recently, she asked what kind of dog he was. I said, “He’s a purebread Yorkie. I have his papers right here!”

She looked at me, laughed and said, “You know these are just computer printouts. Anyone with Microsoft Word can make them.”

All of the hopes I had for this adorable, tiny constant puppy companion were shattered. Yet, despite his flaws and his rakish lazy ear, we love him to pieces. Even Mister Ferguson has come around.

Nacho has been a part of our lives for six years now. He has bonded with our daughter and waits outside of her door every morning until she wakes up. He loves to fish and chew on Dingo bones. He hates the mailman with a passion and I am confident he would rip his face off given the opportunity. He is significantly more high maintenance than my toddler. 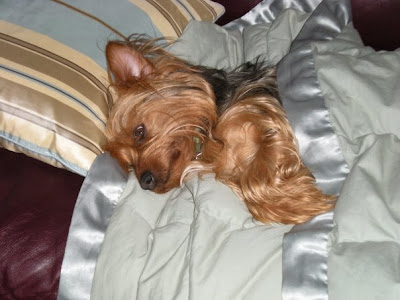 Although we don’t dote on him nearly as much as we did pre-baby, we still adore him. He doesn’t get special Yorkie food anymore, he eats Beneful from the grocery store. In fact, I haven’t set foot in a Pet Smart in years. We try to keep him stocked with bones and take him on walks when it isn’t snowing or raining like crazy.

Unfortunately, Nacho has recently developed a case of halitosis in his older age. It’s awful. It smells like he has been eating shit sandwiches. After a few cocktails the other night, Mister Fergs and I decided we were going to brush his teeth. I held his face, while Mister Fergs played doggie dentist. Bad idea. It was a mess, Nacho was pissed and his breath still stinks. I’m making him an appointment this week and leaving that job to the professionals.

In hindsight, purchasing a puppy in a Chuck E Cheese parking lot wasn't a great idea, but it happened and I wouldn't trade my big-boned, bad-breathed, high maintenance "Yorkie" for anything.  He is, however, the one and only dog this family will have.

He looks like a pb yorkie to me - and they aren't the little obedient fluff balls people dream them up to be. Pedigrees have little to do with good looking or nicely tempered dogs! Glad you've stuck by him. Your honesty is refreshing.

get tiddy in your inbox--enter your email