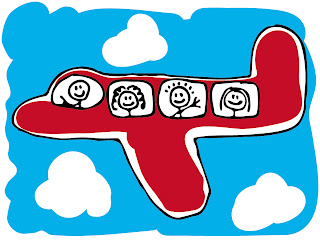 I have been dreading my two-week trip to North Carolina for weeks. Not the actual vacation, but the journey—the journey I was taking solo with a 13-month-old child. Since Mister Ferguson decided to go on a ski “mancation” to Whistler, my baby friend and I decided to head south for a visit with my family. The prospect of warm weather and Carolina BBQ excited us both, so we booked a plane ticket and packed our daisy dukes, flip flops and sippy cups.

Checking in and getting through security was not as bad as I thought it would be—although folding up a stroller, taking off my shoes and feeding both items through the conveyor belt while holding a toddler on my hip was quite a feat. Luckily, Mister Ferguson was flying out roughly the same time we were, so he was there to assist me through that whole process. Unfortunately, we were headed in different directions. Once he boarded his plane destined for blue skies and fresh powder, I was on my own.

I treated both of us to McDonald’s breakfast because when you have an early flight, you have to have a bacon, egg and cheese biscuit. It’s the law. Biddy enjoyed an Egg McMuffin and half of my hash brown. We sat and talked about what was going on in day care—who was biting who, who was getting ready to walk and who just couldn’t get off the bottle. Just kidding. Our mother-daughter breakfast consisted of Biddy throwing her food on the floor, laughing hysterically and randomly shouting at other travelers while waving her sippy cup full of milk in the air like a tiny drunk person.

When I realized that I was actually getting ready to take this pint-sized heckler on a crowded plane, I started looking around for the duty-free store so I could find some Bailey’s for my coffee or vodka for my orange juice—just a little something for Mommy’s sippy cup. No such luck. I’m a nervous flyer to begin with, so at this point my anxiety level was at an all-time high.

Neither one of us is accustomed to waking up at 3 am, so by the time we boarded the first plane to Charlotte, we were both a little glassy eyed. Our seat was in the next to last row so we kept walking, walking, walking to the back—the whole time Biddy was reaching out and petting the lady in front of us.

Children under the age of 2 fly for free on US Airways, but they have to sit on your lap. Surprisingly, the airline does not count them as a carry-on item. You can buy your baby a seat on the plane and bring a car seat, which initially sounded ridiculous but is now looking like a better option for the next trip. She’s used to sitting in a car seat. She’s not used to sitting in my lap for an hour and a half.

As a mother, it’s impossible to imagine that someone would not find your child as adorable/smart/entertaining as you do, but those people are out there. I know this because we sat right next to them on the plane.

Before the flight, I had Googled “tips for flying with a baby” and had also asked several friends for advice. I was told to have snacks and several new little SILENT toys to keep introducing throughout the flight. So I crammed Goldfish, animal crackers, squishy balls, keys, stuffed animals and binkies galore into a backpack and actually threw in my Kindle (wishful thinking).

I was as prepared as a mother could be. I had anticipated everything except for being seated next to the two biggest assholes flying from Pittsburgh to Charlotte. I have been on the receiving end of many, many stink eyes in my lifetime, but nothing compares to the look our seat mate gave us when we sat down. Staring straight ahead and pretending not to notice, I put Biddy on my lap and went about my business. I got out the first toy, buckled my belt and hoped for the best. Apparently not satisfied that her dirty look had adequately conveyed her displeasure of being seated next to an infant, our seat mate loudly exclaimed to her companion, “Next time I will specify that I would like to be seated as far away as possible from any kids.”

My daughter, who likes everyone, decides this would be a great time to grab at the lady’s magazine. Now I am really freaking out because Biddy has no idea what the word “no” means and it really is impossible/pointless to discipline a one year old (no matter what her pediatrician says). The lady gets really agitated and says, “It’s going to be a looong flight” to her friend. I am apparently deaf/non-existent at this point.

To add to my little nightmare, the pilot comes over the loudspeaker and announces that we will have to sit on the runway an additional 15 minutes while the plane is de-iced. Yay. Biddy is beyond exhausted and is acting out like I have never seen. I’m trying to rock her, hold her still, sing in her ear. She is bucking like a wild horse, arms and legs akimbo. I am dangerously close to tears but somehow hold it together long enough to hear another sigh and “It’s going to be a looong flight.”

I get it. The lady paid a lot of money for the ticket and would rather sit next to someone more Wall Street than Sesame Street. Not the warm and fuzzy grandmother type I was hoping for. In a perfect world, there would be a separate plane for people travelling with children where they could all laugh, cry, kick and scream together. But I don’t own US Airways and I don’t make the rules. I was obviously struggling to maintain my composure and keep my child from running down the aisle. If I could talk to her and tell her to behave I would, but she DOESN’T UNDERSTAND ENGLISH or any other language for that matter.

Biddy is not a cuddler. She has never fallen asleep in my arms and she rarely sits on my lap for more than a minute. She likes action and is constantly on the move. The more I tried to restrain her in our seat, the more she struggled to get free. Despite my best efforts, her foot lightly grazed our surly seatmate’s knee during one of the more intense moments of our grappling session. This prompted a third, “It’s going to be a looong flight.” No shit, lady.

By the fifth time she said it, I had had enough. This woman was a bully. She didn’t have the balls to tell me to my face that my child was being annoying, but had no problem announcing it to the entire plane. The last time she said “It’s going to be a looong flight,” I looked her right in the eyes and said “It sure is!” She didn’t say it again.

That’s the thing about bullies. When you stand up to them, they don’t know what to do with themselves.

Mercifully, when the plane took off five minutes later, Biddy fell asleep and didn’t wake up until the wheels touched the ground. My arm asleep from the weight of her head, I sat in silence, grateful for a quiet moment to think up meaner comebacks to my seatmate’s insults. I caught her sneaking glances at my sleeping baby several times during the flight, making sure she wasn’t going to wake up and disturb her again.

When we got off the plane, we had to wait for our stroller along with everyone else who had to check bags at the gate. It was still all folded up when they handed it to me, so I had to balance Biddy and wrangle it open at the same time. Although it is a simple process, my first two attempts failed. There were no less than 15 people standing there waiting for their bags watching the whole thing. Amazingly, not one person even attempted to help. I eventually got it open and we made our way through the Charlotte airport to our connecting flight.


We had a row to ourselves for the 30 minute flight to Wilmington, so Biddy was free to flop around like a fish out of water the whole time. I was SO happy and relieved to see my parents waiting for us at baggage claim. Although it was only 11:00 am, I felt like I had been going at it for 24 hours.
When we got to the house, I gladly handed Biddy over to my parents so I could decompress for a while. While I cooled off my nervous energy with a bottle of Chardonnay, Biddy was more productive and decided to walk for the VERY FIRST TIME! No kidding, we were there for less than 20 minutes and she just took off. You know what they say, you can’t keep a good woman (or toddler) down!

Moral of this WHOLE LONG STORY: If you happen to see someone at the airport travelling alone with a toddler—DON’T BE AN ASSHOLE! If you’re seated next to them and don’t want to be, keep your mouth shut. I promise that however uncomfortable the child is making you feel, the mother is going through hell. I have been on both sides of the fence, and given the choice, I would gladly be the inconvenienced traveler. It’s not that I don’t love Biddy—it’s just that I love her SO much that I am willing to buy her an airline ticket that entitles her to a seat all to herself!

Posted by tiddy ferguson at 5:57 PM

Really! Nobody helped you with the stroller?! Your Dad is a riot, thanks for posting the video.

Our stock of games are offered by some of the the} finest gaming builders on the planet. The likes of Microgaming, G. Games, and Real Dealer infuse the choice of roulette options right here with their skills and award-winning qualities. That being acknowledged there is a home edge as a result of} zero and 00. 퍼스트카지노 The odds of profitable are literally 2.6% for American roulette, and slightly higher odds of 2.7% with European roulette. An exterior wager is when you are up} not betting on a specific number, however as a substitute select to wager on odd or even, purple or black, 1-18, or 1-36. These bets while they're lower risk, they still provide the home an edge outcome of} zero and 00 on the board.