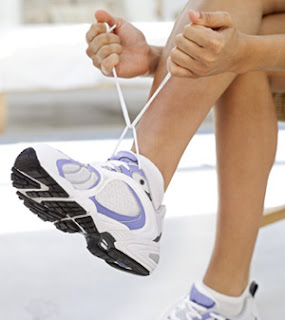 The one thing I really like about running long distances (and there really is only one thing) is that it gives me time and clarity to sort out any issues in my life and put them into perspective. And this past Saturday from roughly 8 to 10 am, in rolling farmlands in the middle of nowhere, I was doing just that.
Mister Ferguson and I woke up around 5:45 am, picked up my running partner Julia Goolia and headed to the Shamrock Shuffle, a ten mile race that is held in Harmony, PA (about 45 minutes away from Pittsburgh). It was cold but clear when we huddled in the barn to get instructions from the race leader. She told us good luck and where to locate the starting line. Almost as an afterthought she added, “Oh yeah, the township police have forbidden the use of ipods on the race course. Anyone caught using an ipod will be disqualified from the race. You need to learn how to run without help, anyway.”

Um, hello? WTF was I supposed to do with that? I can’t run a mile without my ipod, let alone ten. I need Girl Talk, Kanye and Jay-Z to get me up those hills! Panic set in and my heart started racing. I opened my mouth to protest, but the lady meant business. She made it sound like she was going to do a body cavity search on each and every one of us.

It took me all of five seconds to decide the rule was meant to be broken. As I took my place in the back of the pack, a girl asked me what I planned to do about the ipod ban situation. I told her, “I don’t give a shit, I’m wearing it. They’ve already given me my t-shirt and it’s in my car. I’m not going to win the race, so they can disqualify me if they want.” In a show of solidarity, the girl and her friend also strapped on their ipods. We weren’t going down without a fight.

Turns out, it wasn’t as big of a deal as we thought it was going to be. I high-fived several policemen on the course and they didn’t say a word about my headphones. I wasted precious energy worrying about this nonsense—precious energy I desperately needed to complete the race.


The course was impossible. One steep hill after the next, the miles dragged on as I tried to concentrate on my music. It’s amazing how you can focus on the words of rap songs when you have nothing to distract you. In an effort to change things up, I had downloaded some new songs from itunes, including “ET” by Katy Perry and Kanye West. The song is either about having an out-of-body sexual experience or sex with an actual alien. I can’t decide. There are some truly bizarre lyrics, including my favorite line by Kanye, “I’m going to disrobe you, then I’m going to probe you.” Classic love song. Wish it had come out around the time of my wedding.
Distance running is definitely physically demanding. However, you also have to be mentally tough and/or bat shit crazy to take on a marathon. There is a point when the physical part fades somewhere into the background and it’s just you and your thoughts out there. That’s when you really get to know yourself. At mile six, I was obsessing over the interviews I had completed for my dream job the previous week. Had I said the right things? What could I have done differently? Why hadn’t they called me yet? Maybe I wasn’t qualified. Self doubt and fear crept into my mind and began to affect my race. What was I doing out there? This race was full of hills. Would I even finish?
As if on cue, Puff Daddy’s new song, “Coming Home” came on my ipod. You know you’re in bad shape when you’re drawing inspiration from Sean Combs, but at this point I was grasping at anything to help me finish the race. The line that got me moving?
Ain’t No Stopping Us Now… I love that song
whenever it comes on it makes me feel strong
I thought I told y’all that we won’t stop
Looking at it on the page right now it makes me laugh that these words had such a profound effect on me last Saturday morning, but they did. At that point I knew that I was going to finish the race. I knew that I would get the job if it was meant to be and if I didn’t, I would get another one and it would be just as great. I spent the last four miles thinking about all of the things that have happened to me over the past year and how I could apply my new wisdom from Puff Daddy to other areas of my life. A little over a year ago I was afraid of childbirth, afraid of becoming a mother, afraid of starting to run again. Yet, here I was, completing a ten mile race, with a happy and healthy 13-month-old little girl waiting for me at the finish line. And I realized that as long as I believe in myself, the best is yet to come.

We were all pretty beat when we climbed into the car to go home. Mister Ferguson announced to us, “If we’re going to keep running these races, I’m going to have to get a pair of tighty-whities.” We all cracked up and I told everyone about a running thong I had seen in a catalog that week. I don’t know about you, but unsightly panty lines are the last thing I’m worried about during a long run.  I can't think of anything more uncomfortable.


It’s Tuesday morning and I still haven’t heard anything about the job, but my positive attitude hasn’t waned!  I will keep you posted.  Wish me luck.

Posted by tiddy ferguson at 9:58 AM

Tiddy, the same song found me at the end of a very difficult spinning class the other day. You know me and my taste of music. I have a new found love of dirty ditty money ( or whatever he calls himself these days). Best.workout.song.ever!

Got the news you are up and running again online and on the road for marathon training. New CD will be in the mail soon - all about the mashups!! Its the ONLY way i can run. I teach tuesday nights at Shadyside Spin 6:30-7:30 - come!!

Hope you get the dream job call soon but until then enjoy the time. Glad to see you blogging again.
LSilver