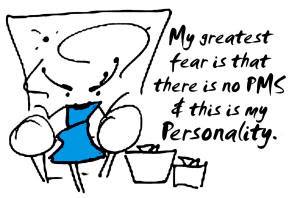 I have MAJOR PMS this week. As a result, everyone and everything is managing to piss me off. Most days, I am extremely easy going and laid back. But when the red tide rises, nobody can escape Tiddy’s wrath.

In order to get even with those who have wronged me this week, I have decided to publicly shame them on my Web site for your enjoyment.


Verizon Wireless
I will be the first to admit that I am extremely hard on my phones. I don’t believe in fancy protectors and I am constantly dropping my Blackberry on the ground. Pretty much every two months I show up at the Verizon Wireless store with a broken phone. What makes me angry is that each time I have an issue, Verizon does ABSOLUTELY NOTHING to resolve it. All they do is tell me no. I have NEVER heard the words, “Yes, I can help you” uttered from the lips of a Verizon sales associate. I even purposely go to different stores each time so I’m not labeled as a “crazy customer.” At this point, I am completely convinced that the company has a training course that teaches employees to only say yes to new customers, and no to existing customers.

For example, this week I showed up with a missing trackball. I dropped my phone the night before. The ball fell out and Nacho ate it (at least I think that’s what happened—I haven’t seen it since). For those of you with a Blackberry, you know that the phone is practically unusable without the trackball. I was desperate for a replacement as I could not imagine spending five minutes without my phone. Don’t judge, it’s the truth. I was confident that my problem was minor and I would finally be satisfied with the outcome of a visit to the Verizon store.

When presented with my dilemma, the sales associated hemmed and hawed for about two minutes and then said, “We don’t really repair phones here anymore. Why don’t you go on the Internet and order the part from an independent dealer?”

“Why would I do that?” I shot back. I bought the phone from you. I pay five bucks a month to you for insurance. It’s your responsibility to fix the phone or replace it. I’m not paying some other company money for a part that you should be able to get out of the back room and pop into the handset. It would take you two seconds. If you give it to me, I will do it myself.”

He just looked at me and said, “Sorry. Can’t help you this time,” and gazed longingly at the new customer checking out phones on the wall. He was getting ready to walk away when I decided to really be a jerk. “Fine,” I said. “The phone is clearly broken, so just give me a new one and I will be on my way.” He said, “Can’t do it. You will have to order one and we will mail it to you. Plus, it will cost you 50 bucks.”

I looked over at the massive pile of new Blackberries and became irate. The guy really had me by the short and curlies. He was seriously not going to do anything for me. I gave him a speech about his shitty customer service and stormed out of the store. I found some random place that repairs phones and they replaced the trackball for 10 bucks and apologized that it was so expensive. What they didn’t know is by that point, I would have paid 30. Verizon Wireless is on my shit list for only accommodating new customers and doing ZERO for existing patrons. I don’t want them to kiss my ass, I just want them to provide a marginal amount of service.

My Dry Cleaner
When it comes to errands, I’m pretty lazy and forgetful. I don’t return movies and library books on time. My dry cleaning would sit at the store for months until I ran out of clothes and had no choice to pick it up. Needless to say, when Model cleaners came knocking at my door with an offer to pick up my clothes and drop them off weekly, I jumped at the chance. Things were great for the first few months. There were clean clothes in my closet! I always had something to wear to work. I felt put together and organized. The clothes would arrive clean and packed nicely. Eventually, however, the quality of service declined dramatically. For one thing, I am missing three sweaters. I have complained about this to customer service, the guy who picks up my clothes and the corporate office. Each attempt I have made to get my sweaters back has been useless. The person on the phone promises to “look into it” and then never gets back to me.

The other problem I have with Model cleaners is that whoever is actually cleaning my clothes is a pussy. I am constantly getting them back with a note saying, “I’m too afraid to take on this stain. I don’t want to ruin the fabric.” What am I supposed to do with that? I can’t wear them with a stain. The only option is to try to get the stain out. I couldn’t do it myself so I sent it to A PROFESSIONAL. If you ruin the fabric, I’m no worse off than I was with the stain. Grow a set. Clean the pants.

My scale
Is a liar. It is spiteful and refuses to give me correct information.

Mall Kiosk WorkersI’m not sure if this only in Pittsburgh, but the kiosk workers in the mall are INSANE. The biggest offenders are the ones that sell the Dead Sea lotion, ceramic flat irons and mineral make-up. You literally cannot walk through the mall without some Latin dude or chick popping around the corner saying, “Excuse me, can I ask you a question?” or “Let me see your make-up!” or “Where do you get your hair done?”

It drives me crazy. If I want to peruse the wares in the middle of the mall, I will. I don’t need some overly aggressive cheesy sales rep accosting me during my relaxing time. I am really tired of pretending to be on my phone or taking alternate routes to stores in order to avoid these assholes. This week I got so pisssed off that I reported one of them to guest services. I don’t think they will get kicked out due to my complaint, but something had to be said. If this continues, I am going to have to take my shopping online permanently.

My Period
It was my understanding that as a female, I was to endure one week of PMS and one week of period. However, the older I get, the longer the battle with my period lasts. My PMS has extended itself to almost two weeks of weight gain, mood swings and chocolate eating. This, coupled with a week-long period leaves me with only one good week a month.

That’s enough bitching for one day. I have some cool Web sites for you guys to check out that I will include in my next blog, along with lists of favorite things compiled by my readers.

Posted by tiddy ferguson at 3:48 PM

I just read this...Model Cleaners I am convinced they wear your clothes and that is where the stains come from. I don't smoke and 2 of my pants came back with cigarette burn stains. I said I don't smoke where did this come from. They said I must have be drunk at a bar and didn't realize. I said I think I would know if I was burned....his reply Not if you are drunk. I haven't been back. Ever....
I stay local in the South Side now.