The Adventures of Tiddy Ferguson 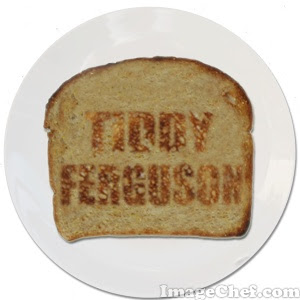 I have a paper cut on my buttcheek. Two free shoe bags (handmade by Tiddy on my very own sewing machine) to the first person who guesses how it got there. Send your submissions to tiddyferguson@gmail.com. Include your address so I know where to send the shoe bags in case you get the right answer! I will publish the best ones (anonymously, of course).

So as it turns out, the paper cut is not the worst thing that happened to me this week. It all started when Mister Ferguson and I travelled down to Wilmington, NC for the holiday. Mom and Pop Ferguson moved down there last May. I have a huge family and we had a really good time. Dinner was great and I went shopping at 4:30 am on Black Friday for doorbusters with my Mom, Aunts, cousin and Sister-in-Law (Sandy Bottoms). I waited 45 minutes in line to buy Guitar Hero for Mister Ferguson (50 bucks--steal) and another half hour for two sets of flannel sheets. I also scored a 30 dollar cashmere hoodie at Old Navy (the new J Crew). People really get feisty over doorbusters. Especially big TVs. I almost lost my life in the electronics department of Wal*Mart. All I wanted were some cheap Wii games!

Saturday night, we all went out for karaoke night at a REALLY redneck bar. I still smell like smoke. Sandy Bottoms and I did a show stopping rendition of "There's Your Trouble" by the Dixie Chix and I had a solo performance of "Born to Fly" by Sara Evans. There was A LOT of Stoli involved. You know how you sing in your car and think you sound just like the artist? I had this awesome vision of me getting up there and really bringing down the house. What really happened sounded a lot like a screeching cat trying to claw its way out of a cage.

Due to the Stoli, I woke up with a bigtime headache and general malaise. I went outside on the porch to get some fresh air and encountered Poppa Ferguson sitting in a rocking chair smoking a cigar. It was 10 am. If that wasn't surreal enough, he proceeded to tell me that my 78 year old grandmother's new husband has requested that the whole family abstain from alcohol this Christmas or they would not be attending this year. This was not what I wanted to hear. I was outraged. This man just came into the family six months ago and all of the sudden he's the Godfather? What's up with these outrageous demands? This issue has not been decided yet, and I will let you guys know what happens. I have a feeling my brother and I will have to revert to our old high school tricks. We are professionals at drinking on the sly and will probably teach our parents a thing or two.

All I wanted to do was nap the day away, but we had a plane to catch! I crammed all of my doorbuster merchandise into two suitcases and went to the airport. Our flight was delayed. We saddled up to the airport bar to watch the Steeler game and imbibe in some desperately needed hair of the dog. We finally boarded the plane and I started to feel human again. That's when the pilot comes on the loudspeaker and informs us that out flight had been cancelled. OMG.

Long story short, we waited in line for more than 3 hours so some douche could tell us that we couldn't get home until Tuesday. That's when Mister Ferguson got assertive and told the guy exactly how we were going to get home (HOT)!

Our journey home was harrowing. You hear horror stories about air travel all of the time. You might say, "Wow! That sucks!" or "I just can't imagine!" No, you can't.

The first few hours, you try to have a good attitude. You see everyone losing it around you and you vow to not be like them. You smile at the clueless airline agent and even laugh a little at your misfortune. However, after you are flagged for "extra security"--a.k.a. your dirty underwear is being manhandled by some man with rubber gloves--and you are berated by unruly passengers for barely making your plane due to said extra security, you start to crack a little.

It was at this point the Fergusons had a little meltdown. Almost the kind that people get arrested for. First, there was a showdown with a flight attendant who wanted Mister Ferguson to check his bag due to the fact there was no room left in the overhead compartments. Impossible! We had to devote the entire day Monday to trying to fly standby out of Charlotte. If we checked bags, we wouldn't be allowed! She must have seen the desperation in our eyes, because she finally relented. They started shifting bags to make room. The "special treatment" we received enraged several passengers, and they voiced their opinions. Tiddy lost it at this point and started to tough talk those who dared talk shit. They had nothing to say back. I think it was because I had started to feel, act and smell like an animal. I probably had crazy eyes.

We finally made it home many, many, many hours later. Pure exhaustion. I could barely lift my fingers to order Chinese food that evening. I was just starting to get back to normal when I got that damn papercut on my buttcheek.

Christmas is just around the corner. We are driving this time.