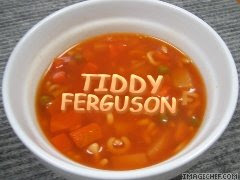 Oh, Morgantown. How I love that place. In fact, I love it so much I am only able to make the pilgrimage no more than twice a year. I only live an hour away so distance is not the issue. It's that once I cross the West Virginia line, I immediately become 21 again. That's not necessarily a bad thing. Tiddy has to let her hair down once in a while. However, when I do make it to Morgantown, I try to cram my entire junior year into one night. And I had a pretty eventful junior year, so that IS a bad thing.

Case in point, Mister Ferguson and I went to catch the WVU/Auburn game last Thursday night. We arrived in time to tailgate for about an hour. I met up with my old boss (who is awesome, by the way) and he led us to a kick-ass setup with motor homes, pig roasts, jungle juice and a full bar! Pretty much as rock star as you can get for Mountaineer Field. However, as I sipped my Tiddy Ferguson and surveyed the crowd, I found myself longing for the PIT. How I wished I was back there...drinking Natty Light, peeing in the creek next to complete strangers, doing beer bongs and skipping the game entirely. This blows my mind: When I was a student, I had access to free tickets and went to four games in four years. Now, I have to pay out the ass to go to a game and we are in our seats before kickoff. What a difference ten years makes.

We're not totally old. We were able to smuggle ten airplane bottles of random booze (thanks to ROHM '08) into the game. They were assorted, so you had to take what you could get. Coconut rum went into hot chocolate...Captain Morgan went into Coke...Jack was taken straight to the head. Needless to say, we were able to keep the party going as we watched WVU destroy Auburn. Mountaineer Field would be so much cooler if they served beer.

After the game, Mister Ferguson and I made an executive decision to spend the night in Morgantown and drive home at 6 am in the morning. Better in theory, trust me. We hit the town hoping for a big night of the Back Door, Chick-N-Bones, Bent Willey's (aka Sullivan's) followed by a nightcap of Casa pizza.

I'm just going to be honest here. Morgantown has changed and not for the better. The shitty bars we came to know and love have been replaced with slick martini joints and swanky lounges. Gone are the days where one would embark on a weekend journey with 20 bucks, get drunk both nights and have ten dollars left on Sunday. I'm not sure where these kids get all of their cash, but I can assure you, Tiddy would have a hard time surviving in new Morgantown. Dead serious, I would go to the bar and order a "White Zin" and really thought I was a classy broad. I had no idea what a martini was back then. Unfortunately, I do now.

BRING BACK SIMPLE TIMES MORGANTOWN! The college girls look like they are 30. I honestly didn't feel that out of place. Maybe it's all the pressure to be a baller in new Morgantown, but it really shows. I didn't see one fresh-faced individual in the crowd.

Long story short, we got our slice of pizza at the end of the night and it tasted just like it always did. That, coupled with the fact I scored two free drinks at Bent Willey's gave me just enough of an incentive to make the trip next year.

The drive home the next day was brutal, but we made it in one piece. I wasn't hungover despite the fact that ROHM '08 and Mrs. Rohm '08 like their shots. I hate anything involving Red Bull. I will be so happy when that goes out of style.

Posted by tiddy ferguson at 7:54 PM